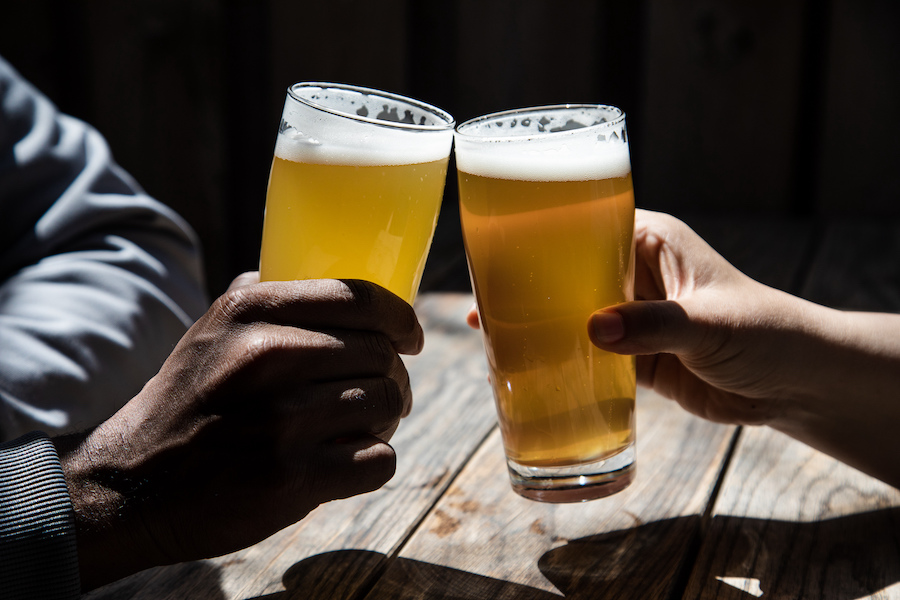 Try the IPAs, lagers, ales and sours at the city’s hottest spots for cold pints

Cheers with beers on the patio at Paradise Grapevine.

There’s never been a better time to get a can of beer from the city’s best breweries, but sometimes a hot day calls for a proper cold pint. Draught beer is decidedly back, so when you’re feeling tapped out, these spots have patios where you can enjoy some of the best.

The Junction was dry until 1997, but now the west-end neighbourhood is a gem for craft beer drinkers. At the heart of the latecomer bar scene is Indie Ale House and its sprawled out Dundas West patio (expanded during the pandemic). With at least 11 beers flowing – made in house with a few guest taps here and there – plus beer flights, cans and a surprisingly good food menu, it’s the place to drink a cold pint almost in the middle of traffic. A classic Toronto experience.

One beer to try this summer: Instigator

A long-time favourite at Indie Alehouse, this West Coast IPA is refreshingly citrusy with a bitter-yet-clean hoppy bite – an ideal version of the beer style that was everywhere a few summers ago. Since we’re in a timewarp, it’s as good a time as any.

A favourite for Ontario craft beer lovers for their eye-catching cans and support of arts and music scenes, this Hamilton brewery opened a Toronto outpost during the pandemic. At their Bathurst and Dundas patio (formerly home to the 6ix Brewhouse and Susur Lee family spot Bent before that), you can grab any of those colourful cans or try one of their local innovations brewed onsite.

One beer to try this summer: Skipping Stones Mexican Lager

The best patio companion, aside from a cute pupper, is a perfect pint on a hot day. Crisp, corny and refreshing, Skipping Stones delivers in every spring or summer situation with a clean, easy, drinkable character.

This Chicago-based brewery is now owned by mega-conglomerate Anheuser-Busch, but it has retained its experimental focus at its nearly five-year-old Toronto outpost. There are at least 11 beers on tap made in house in Toronto, special monthly brews and a few classics from the American brewery (you’ve probably seen Goose IPA out and about). The two patios – one bustling and one like a hidden garden, with a Banksy lurking nearby – don’t hurt either.

One beer to try this summer: Bitter Half

They’ve got an English bitter? Well sign me up, old chap! This bready, low carbonation sessionable beer is a perfect for when you’re in the mood for a brown ale. With notes of biscuit, black tea, orange and stone fruit, it’s sure to please no matter how much Britpop you listen to.

For such an innovative urbanist space – a temporary shipping container market on land eventually earmarked for development – the offerings at Stackt have always felt a little corporate. So yes, the main bar space is a Molson brand, but you can’t go wrong sitting back in the sun with a nice wheat beer, an orange slice and maybe a dog, all in an area that feels like one giant patio.

One beer to try this summer: Mango Wheat

Complete with that cheek-filling wheat mouthfeel you love comes the hint of mango and honey. Big mango on the nose, but subtle on the pallette, this beer tastes like Stackt feels.

This British-style brewpub has been a midtown favourite for more than 30 years, which is an eternity in the Toronto bar scene. Having an outdoor space surrounded by trees and flowers (a low-key wedding venue for beer drinkers) certainly doesn’t hurt. Neither do their ever-consistent beers.

One beer to try this summer: Galactic Pale Ale

This crisp, refreshing pale ale is out of this world. Tropical fruit flavours and aromas derived from Cascade and Galaxy hops (of course) create a pleasing beer best enjoyed on planet earth.

Patrons throw up their clear cups at Henderson’s.

There’s a laid-back Chicago feel to the open, high-ceilinged industrial aesthetic at Henderson’s Sterling taproom in the suddenly bustling neighbourhood that’s also home to MOCA. Having a pint in or outdoors feels charmingly unpretentious at Henderson, especially alongside a streetside bite.

One beer to try this summer: Food Truck Lagered Blond

With a refreshing, balanced character – neither hop nor malt dominant – Food Truck is a summer crusher designed to complement any snack you might encounter during a weekend food pop-up at Henderson, which happens almost every weekend.

If you catch it at the right time, Blood Brothers has one of the liveliest patios in town for a bar that will also satisfy beer snobs. Located on the hip (and recently embattled) formerly industrial Geary strip, the tap room is an excellent spot to sip something sour and funky or cold and refreshing from their 19-strong tap collection while listening to cult indie rock.

One beer to try this summer: Cross My Heart

With a mild funk and a bright acidic character, this raspberry-flavoured collab with Montreal brewery 4 Origines will satisfy your summertime salty Gose desires. Cross my heart.

If you find yourself in line for their well-heeled and always-in-demand Ossington patio on a weekend night, you might wonder if Bellwoods is more about the scene than the beer, but only until you take a sip of one of their many hoppy IPAs or sours.

One beer to try this summer: Bellweiser

Crisp, assertively bitter and absolutely refreshing perfectly describe the Bellweiser pilsner. Whether it’s enjoyed on their patio or in the conveniently adjacent Trinity Bellwoods Park (a hack for days the patio is queued down Ossington), it’s a tasty treat.

This Bloor and Lansdowne gem is a combo brewery/restaurant/bodega/music venue. It’s good for all of those things, but what you really want to do is get a seat on their patio, grab one of their always fresh and rotating selection of beers – Tuesday is an old summer standby – and soak up the sun.

One beer to try this summer: APA

Constantly evolving, Burdock’s APA is a beer to revisit again and again. The “archetypal” American Pale Ale currently features Vic Secret, Ella, Mosaic and enhanced Citra hops, so you can expect a light tropical character with hints of citrus and pine to dance across your palate.

This former auto shop on Dundas West has become the perfect west-end spot for a cold pint at a picnic table on a stolen sunny afternoon. The lively yet laid-back vibe on the spacious front patio/beer garden is the perfect way to sample one of their microbrewed beers – funky farmhouse ales, dank IPAs and sours that are, well, sour. There are also often limited barrel releases, so you can keep coming back.

One beer to try this summer: HIVE

Everything about this double-dry-hopped IPA screams summer. Aromas of honey, wildflowers and fresh cut grass greet you, followed by flavours of clementine and other citrus fruit, finished with pleasant bitterness. At eight per cent, you’ll have a good buzz after a pint of HIVE (see what we did there?).

Kensington Market and craft beer just seem to go together, and this home brew-pub fits like a glove: friendly, unpretentious, kind of scrappy yet very good at what they do. Kensington seems to have figured out its identity in the last couple of years with artsy, identifiable branding and beers in every category. They say what they do on the label: Normal Beer, Another Hazy Beer, Cold Beer, Warm Day. The front patio isn’t huge, but it looks right out onto the busy Augusta thoroughfare, the perfect spot for people-watching.

One beer to try this summer: Cold Beer, Warm Day

Refreshingly light, this one spells out summer crusher with subtle, juicy watermelon character punctuated by light notes of hibiscus. It also looks so pretty in a glass, with a rosy orange-red hue.

This east end brew pub’s Victorian mansion setting provides the perfect platform for a soaring rooftop patio with enough room for you and your drinking buddies. Known for being on the more experimental vanguard of the Toronto craft beer scene, Rorschach has some of the more unconventional summer sippers you’ll find out there. Think Tropical Punch Dreamsicle IPA, Blue Power Drink Sour and Bubble Tea IPA. Yum.

One beer to try this summer: Truth Serum IPA

Okay okay, it’s their flagship IPA, but that’s for a good reason. This hazy citrus bomb is simply fantastic on tap, with flavours of mango, passionfruit, mandarin, pine, tropical fruit and grapefruit. It is a treat to get a fresh pint of this directly from the source.

Breweries and repurposed industrial buildings go together like hops and yeast, and this Stockyards favourite is no exception. The patio got a nice upgrade during the pandemic, and that newly spacious spot is a good place to enjoy one of their small-batch creations and all the care that goes into them.

One beer to try this summer: Armed N’ Citra

Armed with flavours of melon and grapefruit with a pleasing piney finish, this American Pale Ale won’t blow your palate away with hop character on the first sip. Instead it goes down smooth, allowing you to soak in the flavours of this citra focused beer.

The beers at this newish downtown spot are made at their production facility in Etobicoke, but it tastes just as fresh pulled into a pint and served on their off-the-beaten-path patio just slightly away from King Street. There, you can grab one of their rotating beers served in sizes you know or sizes way bigger than you’re used to – like a 32-ounce beer stein. Then grab a colourful can of rice lager, west coast session IPA or excellently crisp pilsner.

One beer to try this summer: Gold Rush Kettle Sour

Fermenting with “cold-pressed cucumber” (whatever the hell that is) really seems to do something to this delightfully refreshing sour, as all of the notes of cucumber, pineapple citrus and stone fruit are present in every sip. Hats off to the brewer, and pints down the hatch for us.

A Junction Triangle microbrewery known for switching things up with the seasons, Halo has summer flavours that go beyond “cold.” Fruity ingredients like Niagara peaches, yuzu, black currant, apricot and elderflower make their way into these brews, and if you’re open to them, they taste absolutely delicious as an outdoor patio crusher.

One beer to try this summer: Tokyo Rose – Brett Saison with Rose hips

A mixed culture of saccharomyces and brettanomyces yeast strains gives this brett saison with rose hips a funky floral character making it a perfect beer for a warm summer sunset.

This is the only spot on our list that doesn’t have its own patio, but it’s hard to have a summer beer roundup without Left Field. All of their beer is baseball themed, but even without the overt association it still evokes memories of mustard dripping off your hot dog while shouting encouragements to Shawn Green (just me?). The beers on offer are the perfect mix of satisfying in an unpretentious way and also creative enough to satisfy the snobs. Would any other brewery put out a can called Ice Cold Beer?

One beer to try this summer: Hello, Friends!

This full-bodied IPA (named after the catch phrase of beloved voice of the Blue Jays Jerry Howarth) is bursting with all-star hops. Galaxy, Motueka and Mosaic collide to create a beer overflowing with clementine, papaya and melon character, rounding out with some pine. Looks, smell and taste, this IPA is a summer crushing triple-threat.