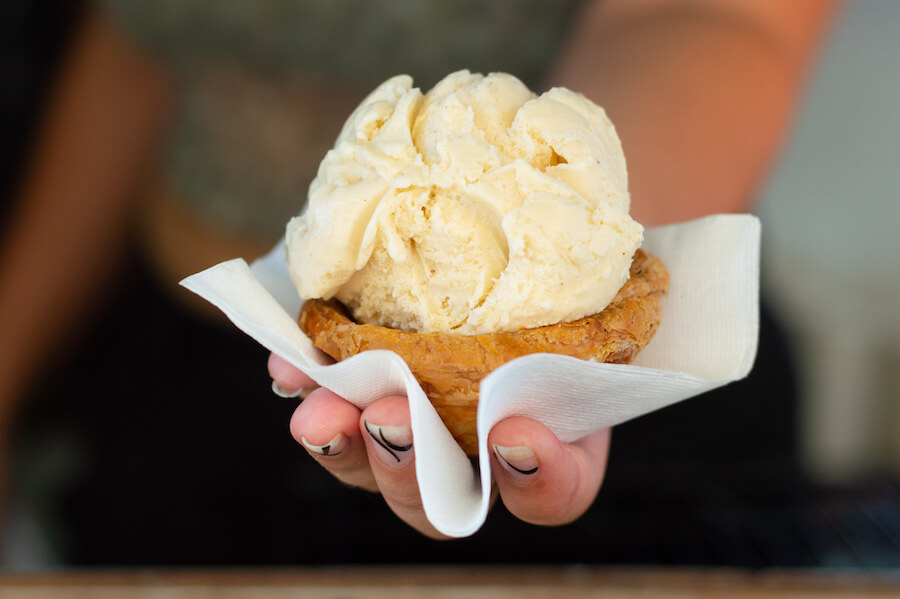 Street food has never been an easy thing to define in Toronto. It’s simple enough anywhere else – “food that’s served on the street” – but that’s a relative rarity in a city where annual six-month deep freezes send most diners, and all but the bravest of food entrepreneurs, scurrying indoors. Often, we’ll loosen that classification to allow for “street food” as a style of cooking or a slate of recipes, embracing sit-down spaces whose menus draw from vendors and markets around the world.

But, as it did with virtually everything else, the pandemic turned even those loose rules on their head. With indoor dining so rarely being a given in these times, restaurants that never would have dared relinquish control of the dining experience are now fully embracing curbside service. Just about anything can be street food now – and, with a little ingenuity, just about any space can become a perfect place to serve it from.

As this new crop of takeout-friendly and takeout-only Toronto street food places prove, the world is your dining room.

The closure of J&J’s Bar-B-Que in Kensington Market (the cover star of our 2016 BBQ issue) left a mac-and-cheese-sausage-shaped hole in my soul. Fortunately, cofounder Jon Lucas has made an appropriately animal-fat- and carb-based return with this sandwich joint on Queen West, located inside Cold Tea. Each roast beef sandwich comes with a dunking sauce (either classic jus or sharp cheddar) – which might be tough to double-hand while standing, but there’s always the bench out front.

This lively Portuguese snack bar (established in 2019 by the Oliveira family) isn’t exactly new; neither is its magical, umbrella-topped patio. What is new: The Kijiji-sourced horse trailer out front, which now offers novel Portuguese-inspired ice cream flavours developed by 21-year-old William Oliveira. Hoof it on down for a scoop of pastel de nata (with optional tart-shell bowl) or blood orange peach sorbet. But if Mercado’s outdoor grill is up and running, be sure to grab a grilled sardine or some butter-brushed mollusks first.

The stars of last summer’s NOW street food feature, Freddy Gyebi and Sabrina Cheddie have expanded their Drake-approved patty empire to include a second location on St. Clair. Expect more of the same loaded open-faced patties, piled with toppings like cheese, jerk chicken and coleslaw, that made them a newly minted Scarborough fave.

A shadow fell over Church and Dundas in the summer of 2018 (and we’re not just talking about the one cast by that new 52-storey condo development). To make way for the construction, beloved taco spot Tacos 101 was ousted, so chef Julio Campos headed west – by one block – and opened refreshment stand Fruta Libre at World Market. After a long wait, Tacos 101 finally has a new home in Kensington, so you can get reacquainted with Campos’s signature al pastor tacos, or test new additions like birria tacos or Tapatio ramen topped with carnitas.

The Haifa Room serves up falafel sandwiches at the corner of Dundas and Ossington.

The striking Waltman building at Dundas and Ossington was recently home to a series of Anthony Rose joints, including Gordy Smiles and Schmaltz Appetizing. Now a supergroup of local restaurateurs from the Lakeview, Paris Paris and the Costume House have transformed the former pharmacy into a takeout-window ode to Palestinian and Israeli cooking. Everything clocks in at under $10, from sabich and falafel sandwiches to za’atar fries – but you gotta get there before they sell out.

This newly opened burger stand, nestled alongside Woodbine Beach, is ready to fuel your scorching summer sojourns to the seaside (by which we mean the lake). Swathed in a funkadelic late-60s peach-and-orange motif straight out of Jackie Cox’s fever dreams, GG’s (short for Goodness Gracious) serves a time-tested roster of smash burgers, dogs and fried chicken sandwiches, plus house-canned cocktails. Rainbow twinkies and funnel cakes send the nostalgia factor over the top.

Sampling fine dining for a fistful of loonies? Argentinian steakhouse Tanto is making the dream real with their pandemic pivot, Super Empanada, which uses the restaurant’s beef empanada – the unsung hero of Tanto’s app menu – as a springboard for a host of handheld eats. Options include classics like the spicy beef or chicken and olive, plus limited-edition treats like the cheeseburger or smoked pork-jalapeno.

With a name like Brick’N’Cheese, you know you’re going to get fed. This Little Italy spot, opened by two best friends who were born and raised in France, offers “French tacos”, a street eat beloved by hard-partying Parisian students. Despite its deceptively dainty-sounding name, the French taco is actually a burrito-sized tortilla stuffed with ample amounts of ground beef or chicken nuggets, fries and cheese, then griddled to create its signature shape.

Guess you really can teach an old dawg new tricks: What was once KungFu Dawg, a hot dog stand at the foot of Ossington, now has a new name and a real-deal storefrwhatre you hont on Dundas West. Chef Stephen Payne makes a variety of wieners in-house (guess they really do know how the sausage gets made) and piles them high with toppings like Hawkins cheezies, fennel slaw and housemade sauces, or serves them up battered and fried.

What do you do when you’re a salon owner and the pandemic forces the closure of the entire hair industry? Beats me, but opening a restaurant in a shipping container out back sounds like as good a plan as any. Tucked down an alley behind Riverside’s Album Hair, Tong Mein specializes in health-oriented noodle soups and bagged broths. Those are sure to kill when the colder months creep in. But since it feels like we’re all physically inside a bag of soup outside right now, the chilled noodle salads with tamari dressing are a refreshing, satisfying alternative.

This excellently named food truck (actually, the food truck’s name is “Gertie”) is a new project from Jen Liu and Rob Lalonde, who poured their savings into the venture after working at the now-shuttered Soso Food Club. The truck, currently stationed north of Yonge and Eg, offers a tight menu of nostalgic eats, including smash burgers, fried chicken sandwiches and donuts from a Lalonde family recipe.

Oysters come on their own tiny plates, and in that sense alone, are they not nature’s most perfect street food? For too long, we had to satisfy our bivalve cravings at specialty seafood restaurants and swank wine bars, but this caterer cracked the whole thing wide open and started shucking the little suckers (from Raspberry Points to Lucky Limes) at a takeout counter just off Bloor. Order your choice of variety or a mixed “shucker’s dozen” and a selection of classic toppings, pull up a picnic table and dig in. 3 Bartlett, 416-534-6061, islandoysters.ca

Update (November 16, 2021): A previous version of this story included Brazil Box, which has since closed.

Natalia came to NOW as the food writer in 2015 before taking over the lifestyle desk in 2019. She has written about food, style, technology, life and travel for the National Post, Sun Media, blogTO and Metro. She enjoys thrift stores and bad puns.

Readers’ Choice 2021: The best places to eat and drink in Toronto