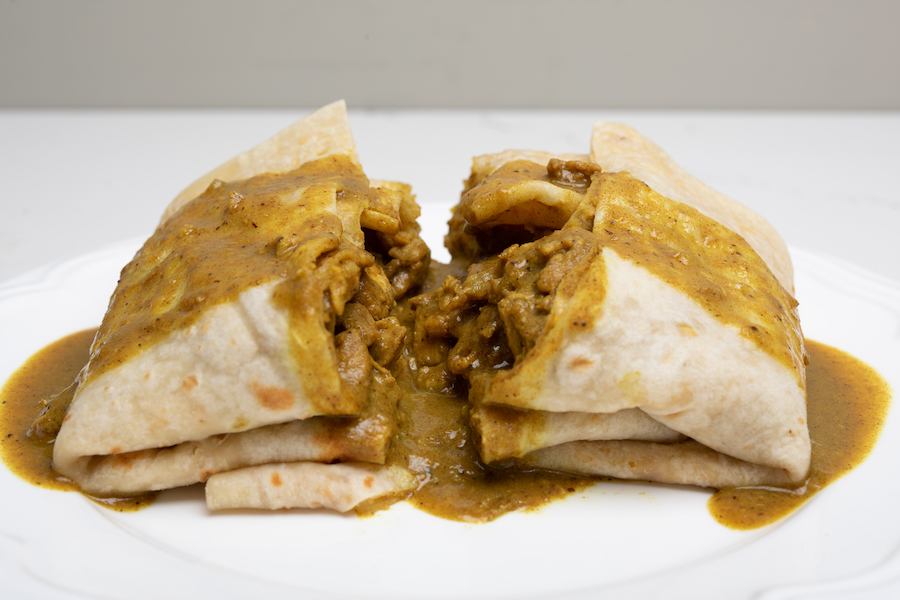 Growing up, there was always Guyanese bread on the counter. Visitors would point out how it looked different from the average loaf of white or whole wheat. Guyanese bread, which my family would grab along with tennis rolls and butter flaps from immigrant establishments like Norman Sue or Naraine’s bakeries, is longer, wider and fluffier. The dough looks braided, which is why it’s also referred to as plait bread.

Scarborough has no shortage of Caribbean food spots. But finding authentic Guyanese food and, more specifically, Guyanese baked goods like cassava pone, pine tarts and plait loaves, wasn’t as easy as getting your hands on a hot plate of jerk chicken or oxtail.

Shereen’s Bakery (1063 Midland, @shereensbakery), with its wide selection of Caribbean dishes, is changing that.

On the weekends, Shereen’s offers special breakfast items like fish cakes, cassava balls, bake and saltfish and something Guyanese people call boil and fry, which is a mixture of plantain, sweet potato and dumpling – plus all the baked goods I and so many other Guyanese kids grew up on.

On any given weekday, the takeout lunch menu is stacked with eats like stew fish, curry goat, bhaji, chicken and a wonderful chow mein that gives my granny a run for her money. But if this is in fact a restaurant, why is it named a bakery?

“We started off as a bakery,” Shereen explains. She transitioned into a takeout restaurant at the request of her loyal and appreciative customers, a group of people she says she simply cannot say no to.

“Initially I had a small hot table and would put a few items out each day. And then over time it just kept getting bigger and bigger. We started to cook, but we never advertised it. People who knew we cooked would call ahead and order and we would have it ready for them.”

A few weeks ago, I walked into Shereen’s Bakery for the first time. I had been following the bakery’s account on social media for at least a year and had spent an embarrassing amount of time scrolling through the tantalizing videos and images of hot, home-cooked food.

Keeping it social and in the family

It’s rare that Guyanese bakeries are on social media, which was one of the first things I noticed. Caribbean bakeries have long operated strictly on word of mouth. There was never a need for paid advertisements or cheesy commercials or even an Instagram page. Bakery owners could trust their customers to spread the word. For decades, that was enough to keep these businesses afloat. In many cases it still is.

But with Shereen’s kids heavily involved in operating the bakery, they knew having a social media presence was important and they see to it that the Instagram page is active, maintained and customer inquiries are addressed.

“Everyday we were getting inquiries about what we had on the menu for the day,” Shereen explained. “So now we do a video of our hot table and list off the items for everyone to see.”

When I asked Shereen what got her started, she shared the sentiments of so many immigrant entrepreneurs – wanting better for her family.

“I didn’t want my mom working in a factory,” she said plainly. “I knew I always wanted to be an entrepreneur and run my own business. So when the corporate company I worked for was doing layoffs, I begged them to lay me off. After a while, they did. I took some time to just enjoy my kids and decompress.”

But when Shereen started planning for her next move, there were obstacles ahead. Becoming an entrepreneur wasn’t easy. She sold her home, looked into the idea of franchising, paid someone for a small table in a larger shop and made a few financial mistakes along the way until she felt the universe was compelling her to do something bigger and find her purpose.

Sixteen years ago, she set up shop in a plaza on Midland nestled between Eglinton and Lawrence.

“I chose Scarborough because of the community,” she said. “I wanted to be in Pickering but the rent was too expensive. When the landlord told me the price, I said ‘You’re not getting that much from this immigrant!’”

Shereen takes pride in her shop being a place that takes people back home, even if only for a moment.

The bakery gets students from nearby St. Joan of Arc Catholic Academy high school coming in at lunch time. “It’s so cool to see all the Guyanese kids coming in with their girlfriends or boyfriends and buying snacks to teach their partners about their culture. It brings me great joy when people walk in here and tell me they feel like they’re back in Guyana.”

And it makes sense that her customers feel this way. For so many immigrant communities, food is a portal to their native land. The memories and nostalgia attached to dishes and snacks, even just the smell of them, is unparalleled. And for communities where so many dishes are rooted in tradition – like pepper pot, Guyana’s national dish – it can unlock so many memories.

Pepper pot is a slow-cooked stew that is a Christmas staple, served alongside freshly baked Guyanese bread. Almost every Guyanese family I know has the extra-large Guycan pot. Come December, it is filled with meats like beef, cow heel and pig tail, cassareep and the slew of other ingredients that make up the distinct pepper pot taste. My dad would stay up all night on Christmas Eve, checking the pot every few hours to inspect the tenderness of the meat. Christmas morning presents and pepper pot are childhood memories braided as snugly together as plait bread.

Shereen described an instance last Christmas where a customer came in and explained that her mother-in-law had died, and since her death her husband hadn’t been able to enjoy a nice, soulful serving of pepper pot. Then she asked if Shereen would make some for him, to which she agreed. But this wasn’t just any pepper pot – it had to be vegan.

For such a meat-based dish, Shereen had a challenge in front of her. But she managed to put together a lovely ensemble featuring tofu and beans and made it as close to the taste and look of the traditional meat dish as possible. When the customer came in, she asked him to try it right then and there.

“He had a spoonful of it and you could see in his eyes how thankful he was to be able to experience it again,” she recalled.

Hearing this story warmed my heart. I’ve often thought of what my siblings and I will do once my dad is no longer around to make his famous Christmas dish. It speaks to the importance of preserving the cultures, something her Scarborough location also allows her to do.

Initially, Shereen wanted to open a European bakery. “That’s what I’m attracted to,” she says. “But every time I would go out, I realized there weren’t enough Guyanese bakeries out there. So finally, I told my family, ‘We’re keeping this full-blown Guyanese. I don’t care.’”

Where to eat in Toronto during TIFF